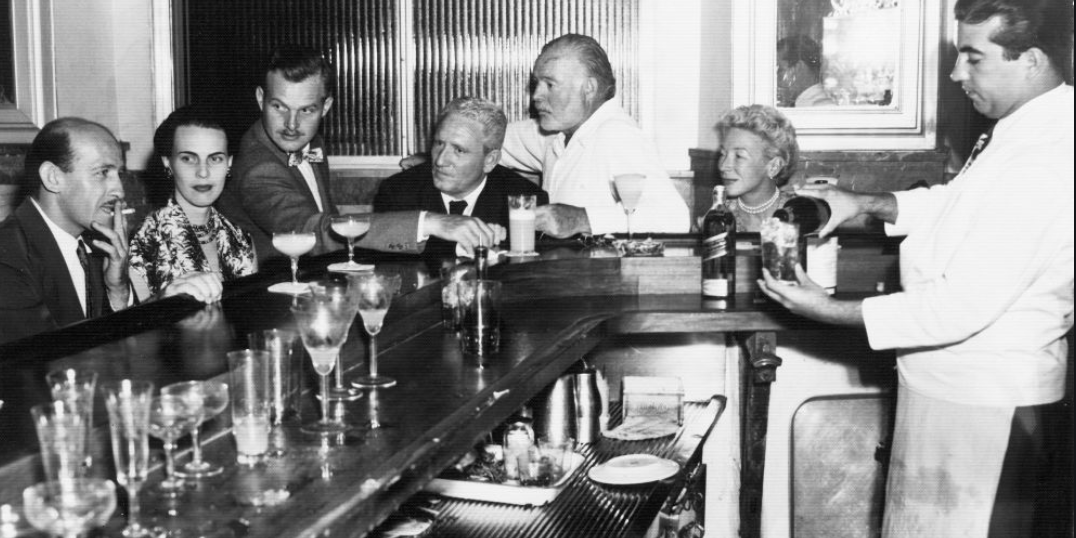 The Famous Ritz hotel in Paris was founded in 1889. They opened two bars across from each other; one for men, and the other for women. “The Ladies Bar,” was renamed for the famous writer and patron, Ernest Hemingway. Stories say that in 1944, when the Germans retreated, Hemingway, then a war correspondent, drove up to the Ritz with a group of soldiers and “liberated” the bar, ordering champagne for everyone. With only 25 seats, this is a prized memory worth the effort. Just don’t order the Sidecar, the legendary ‘world’s most expensive cocktail’ will set you back 1,500 dollars. All the drinks are decorated with beautiful flowers as homage to the original name. You and your sweetie will never forget this watering hole.

One of the nice parts of a romantic trip is that you can stay out after dark and enjoy the other side of Paris. You can easily take any number of river cruises during the day; but, it is extra special at night. The large boats are affordable and frequent if you’re on a budget, but a river limousine is next level if you want a special spot to see the Eiffel Tower when she shows off her lights. Take your private hour and a half cruise along “Paris’ most beautiful avenue,” the Seine. Share a glass of champagne on board and see why they call her the City of Lights.

The Palais Garnier is named for the architect who was commissioned by Napoleon to create the legendary opera house. The acoustics were considered to be the very best in their day. The eclectic design ranges from Renaissance to Modern, and even displays a Cheegal chandelier. It is also the famous setting of the 1910 novel The Phantom of the Opera. Daily you can purchase last minute tickets at a discount and to explore the mini Versailles during the intermission with a glass of bubbly. They primarily provide ballet performances which is a real treat since the stage is sloped for a better view.

Housed in the historic General Stores of Paris, this former grain and wine depot, is located on the banks of the largest artificial lake in Paris. It dates back to 1808, purpose being to link the Ourcq canal to the St Martin canal. It can still be traveled on a special river cruise through the many locks, but my favorite part is this great craft brewery which is perfect for that special guy that doesn’t fancy French wine. Skip stone like Amélie and enjoy it in the summer when you can swim in La Villette during the Paris Plage festive annual event.

Founded in Paris in 1951, with over 65 years of dazzling performances, the glamorous 90-minute show has all of the cabaret’s most iconic acts. An exciting alternative to the Moulin Rouge, it dazzles in the risqué manner than the original cabaret did in the old times. Cost varies depending on if you’re eating, drinking or just there to see the show. It is best to get a drink package which saves you a little money since the starting ala carte glass of champagne is 20 euros. Legend into the refined world of Parisian cabaret 2 shows a night, 7 days a week, sure to spice up your night.

The Sainte Chapelle was a private chapel located in the Palais de la Cité for King Louis the 9th. It was built specifically to house precious Christian relics, including Christ’s crown of thorns for which Louis was canonized as a Saint. They were moved to Notre Dame when it was completed for visitors to view once a month until the fire, and now live inside the Louvre. The Chapel is constructed of 1,113 stained glass windows, depicting scenes from the Old and New Testaments. On a sunny day the rose glow is amazing and at night they often have classical concerts that last approximately an hour and is a perfect treat for any one especially a music lover.

Kill two birds with one stone; tour castles and vineyards for wine tasting, all in the same day. Perfect for additional days in Paris or repeat visits. The air conditioned coach ride along the countryside is picturesque and stress free, since there’s no need to navigate. You’ll just sit back and enjoy the ride. Visit the 16th century Château de Chenonceau followed by Château de Chambord. Both of which are some of the most visited castles because of their beauty and history. If you ask nicely, they will open a bottle to share on your ride back to Paris that evening!

A couple of great collectors, the Jacquemarts left their 19th century Haussmann’s mansion as the property to France in 1913. They organize two major temporary exhibitions each year. The small museum in their home displays not just their art, but furniture and it’s unique architecture. In 1876, the inauguration was a huge event where the guests discovered the double-revolution banister staircase, which resembles the foyer of the Paris Opera house Garnier had just built. Open Mondays until 8:30 p.m. it is a fun thing to do in the evening, and is small enough to enjoy in an hour or two.

In 1835 this former foundry was discovered and the idea of creating a Digital Art Centre for Paris was born. The Atelier des Lumières opened its doors to the public in 2018. Shows displaying the works of famous artists such as Klimt, Van Gogh and Monet have packed in the crowds ever since. They have had over a million visitors per year since, and are opened late for a an evening activity. Enjoy the shows from their bar were screens allow you to view the show while sharing an adult beverage.

Last but not least, take a tour with me! I have 6 tours currently available and as always customize according to your desires. For the first time visitor to Paris I recommend starting with the Stories from the Heart of the Citytour on the Island of Cité, the center of Paris. Been here several times? I recommend the newest tour we are offering, Charm and Secrets of Paris Passages. There’s even tours for foodies. Send me a note today and we will start working together on your next great adventure. towertobridgetours@gmail.com