Beyond the Croissant…5 unsung French delights at the Boulangerie 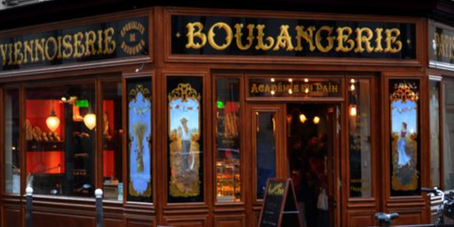 Croissants may be the most desired pastry that travelers search out upon arrival in France, but there is a missed opportunity here. We don’t often find the same things out of the country, so why not try some other simple baked goods while in town? This blog is dedicated to five unsung heroes of the French baking world. Typically these treats are called viennoiserie.

Viennoiseries are baked goods made from a yeast-leavened dough similar to bread or brioche, or from puff pastry. There are a few added ingredients giving them a richer, sweeter pastry. The dough is often shiny and hosts a variety of fruits, chocolate, and creams. Viennoiseries are typically eaten at breakfast or as snacks and are a bridge between bread and pastry. They are usually found near the register and the baguettes.

According to legend, Chaussons aux Pommes (apple turnovers) was invented in 1630 in Saint Calais in the Sarthe region of France. The town was suffering from an epidemic (sound familiar) and a woman of the town distributed flour and apples to the poor of which they made apple turnovers. In the states, you have a version of a hot apple pie at McDonald’s’, but this is definitely not the same kind of fast food. In my tastings, I have found what I consider the best Chausson aux pomme in Paris at The Boulanger de la Tour, the baby sister to the famed restaurant La Tour D’Argent. It has a flaky, crunchy exterior that showers you with crust dust as you dive into the gooey apple filling.

The second hero of the Boulangerie is the Chouquettes which loosely translates to “little bits of choux.” It is a type of Choux pastry consisting of small dollops of dough crusted with pearl sugar. In my humble foodie opinion, the best one in Paris is at La Prairie by Thierry Racoillet near the Moulin Rouge. They are usually displayed in baskets perched atop the glass pastry cases of the boulangeries. Basically, they are profiterole shells—crisp, airy, and hollow. They are just a bit sweet, slightly rich, and eggy from the pastry. They are sold in a sack and make for better snacking than chips!

Pains Suisse translates as Swiss bread, but has nothing to do with Switzerland apart from the presence of chocolate perhaps? This treat is also known as a brioche suisse which is a particularly delightful viennoiserie. It consists of a buttery brioche dough or croissant dough rolled out and then folded around vanilla pastry cream like custard and sprinkled with chocolate chips. The chocolate is more evenly distributed than in pain au chocolate (chocolate croissant), and It is formed into a rectangle or a spiral that will not let you down. I like that it is creamy without dripping in goo. It’s as close to a Danish as we have in America minus the fruit.

My personal crush at the moment is with this tasty cake. The name comes from the Breton language words for cake (kouign) and butter (amann). It is around multi-layered cake, originally made with bread dough, or pastry dough, containing layers of butter and sugar folded in, similar in fashion to puff pastry but with fewer layers. The cake is slowly baked until the butter puffs up the dough and the sugar caramelizes. The effect is similar to a muffin-shaped, caramelized croissant which requires a ratio of 40 percent dough, 30 percent butter, and 30 percent sugar. How can that be wrong? Traditionally, kouign-amann is baked as a large cake and served in slices, although recently, the individual cupcake-sized pastries (kouignettes) have become more popular. Well-known French pastry personality Cyril Lignac wins the honors for the best one in town though it is easier to find a variety of flavors in the popular chain Maison Georges Larnicol MOF.

In the North of France past Belgium, there is a tart that can take on different forms. It is usually leavened dough topped with brown sugar which is unrefined and generally from the residual crystallization of syrup. In addition, there is butter or cream and sometimes eggs. The raw sugar material was imported from the colonies and passed through the port of Dunkirk before being refined in several large centers in the Nord department. Making it a particular treat in that area. It is considered a family pastry which has become a common product in supermarkets. If you visit any of the Paul bakeriesyou’re sure to see them. The family-owned bakeries dating back to 1889 and is always reliable and easier to find than Starbucks.

They have an interior of soft, light, thin layers, while others are like soft, doughy bread. The fact is the Viennoiseries of France are not to be missed. A croissant can be a work of art that you find around the world. Why not explore regional delights when you have the opportunity. I’ve always gone out of the way to find secret treats in every city I’ve visited, and hopefully, this list will give you a few ideas on your next adventure in Paris. Be sure to contact me the next time you’re in town for a guided tour including other treats you’ll remember.